The Town of Washington is located in northeastern Shawano County, generally east of the City of Shawano. The town surrounds the Village of Cecil and includes most of the southern and about half of the northern shorelines of Shawano Lake. STH 22 enters Washington near its southwest corner, angles through the town in a northeasterly direction, and exits in the northeastern part of the town at the Oconto River. Washington has been experiencing steady growth over the past few decades. The upgrade of Highway 29, which passes a short distance to the south, will make the town more convenient to the Green Bay urban area and is expected to increase development pressure in the town.

Concerned about the impact future development may have on the town, Washington along with other neighboring communities and Shawano County entered into an agreement with East Central Wisconsin Regional Planning Commission (ECWRPC) to prepare a land use and development plan. As part of the planning process, a land use planning committee was Created by the town representing a variety of interests and viewpoints. The committee served as an advisory body during the plan's development. As a first step, the committee undertook a citizens survey to determine major issues and concerns of town residents. Encouraging ongoing involvement of interested citizens as the planning process evolved, the committee drew extensively from this public input as it formulated goals and objectives. The plan also
includes an inventory and analysis of the town's physical, cultural, and economic characteristics and resources. Together, these components provide the basis for developing a set of strategies and recommendations which correlate the concerns and vision of local residents with the physical characteristics of the land to guide the extent, type, and location of future development. As such, the land use and development plan is intended to serve as a guide for future development of the town.

The Town of Washington contains approximately 35 square miles of land area and nearly four square miles of surface water. lts estimated 1997 population was 1,771. In 1990, there were 642 occupied housing units in the town, with an average household size of 2.52 persons. Approximately 43 percent of the Town of Washington's housing units were vacant. About 88 percent of the town's vacant units were used as seasonal residences.

The Town of Washington's housing stock is comprised mostly of single family residential units and manufactured/mobile homes and house trailers. ln 1990, about 68 percent of the town's 1,120 dwelling units were classified as single-family units, and nearly 31 percent were manufactured housing, mobile homes or house trailers. The median value of Washington's owner-occupied housing ($67,400 in 1990) was 48 percent higher than that of the county.

Washington's employment base is diverse. In 1990, about 23.1 percent of the town's residents were employed in retail and wholesale trade, 20.7 percent held service sector jobs, 19.5 percent were engaged in manufacturing, and 16.3 percent worked in agriculture, forestry, fishing and mining. Miscellaneous employed categories made up the remaining 20.5 percent. Like many other rural areas in Shawano County, the town experienced a significant job loss in the agriculture, forestry, fishing and mining sector between 1930 and 1990.

Nearly 70 percent of Washington's working residents held jobs in Shawano County in 1990. An additional 16 percent of the town's workforce commuted to jobs in the Green Bay urban area while another seven percent worked in the Appleton/Oshkosh urban area. Slightly over three percent worked in nearby Oconto County. 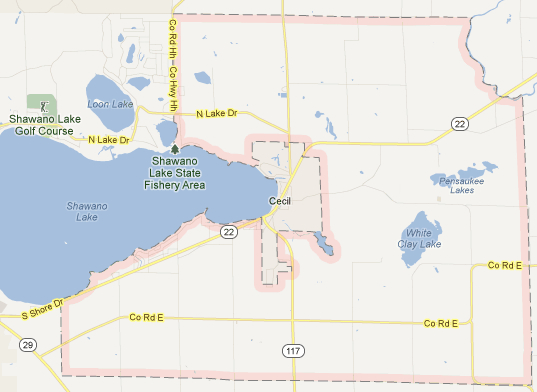